Thank you for everybody who supported this event !!!!

Scent of Lavender has joined Walk for Hope to put an end to woman's cancers, because I want to make a difference in the fight against woman's cancers. More than 275,000 women will be diagnosed with breast or a gynecological cancer this year. More than 25% of those women will die from these diseases. I want to save these women. I want to help City of Hope researchers find cures.

October in this year was my 5th year of been breast cancer survivor. I am so grateful. I am so healthy and happy everyday..

City of hope saved my life and continually helping others. Thank you very much who walked with me also who donated money in this hard economical time. You will save more woman's life. 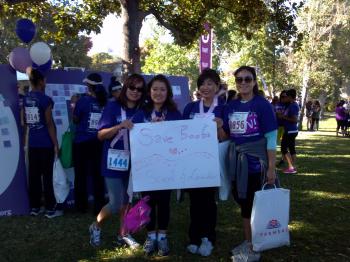 A late-stage trial of 4,560 post-menopausal women who were at increased risk of developing breast cancer found that those who took the drug, also known as exemestane, had fewer invasive breast cancers after 3 years and without severe side effects.

"We are delighted with this two-thirds reduction," Dr. Paul Goss, director of Breast Cancer Research at Massachusetts General Hospital, said in a telephone interview.

He noted that there were fewer of the more aggressive types of tumors in patients who took the drug, but the limitation of the study was that the median follow-up was just 3 years.

The results were presented in Chicago at the annual meeting of the American Society of Clinical Oncology.

An estimated 1.3 million women are diagnosed with breast cancer worldwide each year and nearly 500,000 die of the disease.

The study broke participants up into two groups: One got the drug and the other got a placebo. There were 11 invasive breast cancers reported in the drug group compared with 32 in the placebo group. There were also fewer cases of precursor lesions in the group that got exemestane.

Goss, who led the study, noted that tamoxifen has been used for years to prevent breast cancer, but had serious side effects, including raising the risk of developing uterine cancer, cataract formations and stroke.

Exemestane did not cause high levels of toxicity, he said. Its side effects were much milder that those seen with tamoxifen, he said, although there was a slight increase in osteopenia -- low bone density, but not low enough to be classified as osteoporosis.

Other side effects reported in the study included hot flashes, sweating, fatigue, and insomnia.

"Age is the single biggest risk factor for developing breast cancer. Once you are 60, your risk increases so this (research) merits consideration for prevention. What we don't know is whether patients need to take this pill for life."

After 5 years, there was no dangerous accumulation of toxicity from the drug, he said.

"I can't look someone in the eye and swear it won't be (toxic over a longer period of time), but there's large evidence that the drug is safe," Goss said.

People have been taking statins to lower cholesterol and antihypertensive medications to reduce blood pressure for years, Goss noted. "This is the same concept."

And the price of exemestane has fallen significantly.

Commercially, even with its patent still protected, Aromasin was only a moderate seller in first quarter, with sales down 11 pct to $114 million.

The once-a-day oral tablet was originally approved to treat advanced breast cancer in post-menopausal women who had already been treated with tamoxifen for 2 to 3 years. The drug is also used to treat women whose breast cancer worsened while they were taking tamoxifen.

The drug is a hormone therapy classified as an "aromatase inhibitor," which work by decreasing the amount of estrogen the body produces. Lower estrogen levels can slow or even stop the growth of some breast tumors that need estrogen to grow. 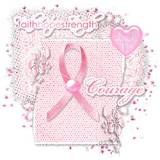 We are very proud to announce that we have established an affiliated website on breast cancer. We would like to develop it as a website that supports women with breast cancer. Cancer survivor or their supporters, all have impressive story. If you would like to share your own story with cancer or that of someone you know, please submit it to us. It will help and cheer other women.

My story (Mayumi diagnosed at 49)

In the summer of 2007, I was diagnosed with breast cancer just when I thought I had everything going right in my life. I had a mammogram exam after skipping it for 2 years having been so busy. The doctor found a lump on my left breast.

I was referred to the City of Hope which is well known for its remarkable treatment and research in cancer.

I was very comfortable with the medical staff at the “Women’s Health Center” which exclusively focuses on women’s health at City of Hope.

Thank you for your support


We would like to thank you for your support of the "Walk for Hope" event to help the City of Hope.

Scent of Lavender has raised a total donation of $340 this year.

We had six walkers at the event last Sunday .

The event was filled with a lot of positive energy to fuel the fight against breast cancer..

We appreciate your continuous support of City of Hope for breast cancer reserch. We believe that it is a great cause for all woman in the world.

Please see some photos below

It's already been three years since I was diagnosed with breast cancer. Now I am cancer-free and enjoying my life with a healthy body.

.
This year I've registered for City of Hope's Walk for Hope on November 7, 2010 in Duarte, CA.
Walk for Hope supports women's cancer research, treatment and education at City of Hope, an amazing place that saves lives everyday. I want to help City of Hope find a way to eradicate cancer from our lives, so that one day we will be freed from this horrible disease. I know you feel the same way.


I have walked at this event before with my friends and had so much fun. It felt wonderful to do something for a great cause.
Walking 5K is easy and great exercise to do on a Sunday morning. Let's walk together.

If you would like to join me, please register your name at the site below.
It costs $25, and you can make an additional donation as well.

When you go to the site, click Los Angeles as the location and indicate "Scent of Lavender" as your team. 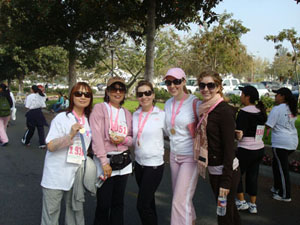