In last two month I found suspicious spots on my clients skin . They went to their doctor and found out those were skin cancers.
Summer is here, I 'd like to share some info about skin cancer.

People normally think that skin cancer is brown or black hard legions. With my long time experience been skin professinal, I see many peoples are neglecting pink or red spots which are prone to be a skin cancer or cancer. 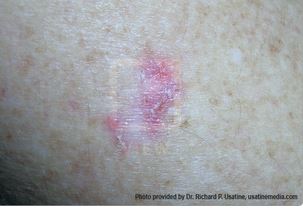 I f you have any pink or red spot that constantly irritated and scaling, please ask your doctor to check. 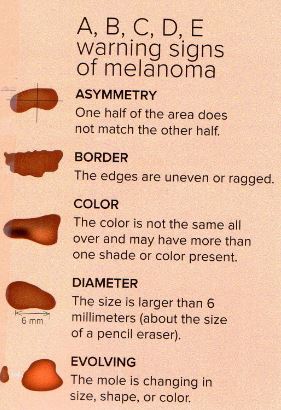 I would recommend Sunblock with physical blocker ingredients( Zinc oxide, Titanium oxide) are very safe and powerful sunblock.
Be careful of too high SPF number. The numbers more than SPF 30 will be not much different as far as strength of protection from the sun is concerned. It is good idea to test sample on the skin behind of your ear or inside part of your upper arm.

If you are over 40 years old, your smile make you look younger-new research 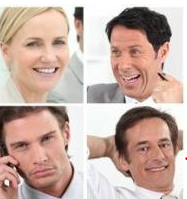 481 test subjects participated in the research of Theo Gevers and Albert Ali Salah. The researchers made a video recording of a posed smile and a spontaneous smile for each participant. The subjects also were also asked to look angry, happy, sad, surprised and scared. Gevers and Salah analysed certain characteristics, such as how quickly the corners of the mouth turn upwards. This knowledge can be applied to computer software which guesses ages, recognise emotions and analyse human behaviour.

The researchers also asked the test subjects to look at images of other test subjects. They had to guess the age of those people and state how attractive they found them. They were also asked to judge character traits, such as whether the person is helpful by nature, or if that person is perhaps in love?

The data collected allowed the researchers to develop software that can estimate people's age. The software takes into account whether someone is happy, sad or angry, and adjusts its estimate accordingly. The software appears to be slightly better at estimating ages than humans. On average, humans' estimates are seven years off , while the computer is six years off on average .

The research of Gevers and Salah also shows that you look younger when you smile, but only if you are over forty. If you are under forty, you should look neutral if you want to come across younger.

I have been taking multivitamins for over 30 years. I just found article of study below made me think if I am taking right supplements after all.
The article below is from " Bio-USA"


Oct 11 (Reuters) - Women taking multivitamins don't live longer than those who get their nutrients from food alone, according to a U.S. study that found they in fact appear to have slightly higher death rates.

About half of adult U.S. residents take dietary supplements, and the industry now boasts of annual sales as high as $20 billion. Yet research suggests that some of the largely unregulated substances, such as vitamins A and E, could be harmful in high doses, according to an editorial published with the study in the Archives of Internal Medicine.

"There is very little evidence showing that common dietary supplements would be beneficial in prevention of major chronic diseases," said Jaakko Mursu of the University of Minnesota in Minneapolis, who worked on the study.

"Unless you are deficient, there is hardly any reason to take them," he told Reuters Health.

Mursu and his colleagues used data from nearly 39,000 older women who participated in the Iowa Women's Health Study and filled out questionnaires starting in 1986.

The survey asked about use of multivitamins, vitamins A, C, D and E as well as beta-carotene, B vitamins and minerals such as calcium, copper, magnesium, selenium and zinc.

During the study, supplements became increasingly popular. Between 1986 and 2004, the proportion of women who said they took one or more jumped from 63 percent to 85 percent.

Only calcium supplements were linked to a lower risk of death over 19 years of follow-up, with 37 percent of users dying compared to 43 percent of non users. That link held up even after considering that women taking supplements had a healthier lifestyle than the rest.

By contrast, women taking other supplements did not live longer. For instance, 41 percent of multivitamin users died versus 40 percent of non-users -- and the gap became even wider when adjusting the numbers based on health problems like diabetes, high blood pressure and overweight in the two groups.

Mursu said he expects that his findings will be true for men as well, adding that they jib with earlier research hinting that dietary supplements do little good in Western countries where vitamin deficiency is not common.

One possible exception is vitamin D, which one recent study suggests may help women live a little longer.

"I would rather conclude that there is no evidence for benefits," he said.

The 2010 U.S. dietary guidelines recommend getting nutrients from food, not supplements. However, women of reproductive age are advised to get extra folic acid and those who are pregnant may want to take iron supplements if their doctor suggests it.

The guidelines also urge people 50 and older to get extra vitamin B12 from fortified foods or supplements.

Duffy MacKay of the Council for Responsible Nutrition, a trade association representing manufacturers and ingredient suppliers of dietary supplements, disagreed with the researchers' conclusion that doctors should only recommend supplements to people with deficiencies.

He added that in the case of iron, women on high doses may have underlying conditions that could explain their higher death rates.

While Mursu acknowledged that shortcoming, he said it is unlikely to be relevant for multivitamins, which usually aren't prescribed by a doctor.

Short of getting sick, he added that it's hard to know if you are getting enough vitamins and minerals, and that screening everybody would be prohibitively expensive.

"Include as many vegetables and as much fruit as you can," he said, by way of advice. "There is hardly any reason to limit those, and they contain a whole lot of vitamins and minerals." SOURCE: bit.ly/7qXyI (Reporting from New York by Frederik Joelving at Reuters Health, editing by Elaine Lies)

We are happy to announce that we now our original Soy Candles !!

You will feel your stress melt away with our naturally-scented soy candles.

Scent of Lavender Soy Candles are hand-poured using 100% FDA-approved soy oil. They burn 40% longer than parrafin wax-based candles, are soot-free, and do not emit any harmful toxins into the air. They also burn at a cooler temperature of 106 degrees F and remain warm to the touch (and will not burn little hands!). The melt pool can be used as a moisturizer for your hands.

Our soy candles come in a variety of scents like lavender, Sage, Pomegranate and Lemongrass.

If you are over 50 you will like this article below,
“More happiness, less worry after age 50, study find”
With age, we inevitably develop more wrinkles, aches and pains, and more problems of all kinds with our bodies. But these unwelcome changes don’t seem to get us down. People over age 50 are apparently happier and less stressed :We e worry less and feel increasingly better about our lives, even into old age. These are the finding of a study published in the proceeding of the National Academy of Sciences that investigated age-related changes in two different aspects of well being overall satisfaction with life(global well-being) and day to day experiences of certain emotions